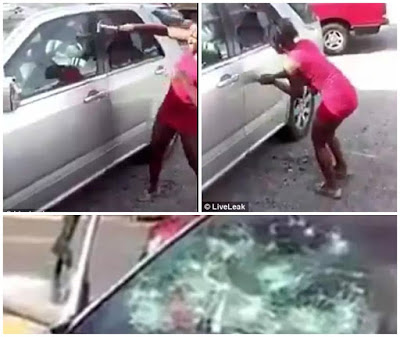 A woman who allegedly broke up with her boyfriend went into total emotional meltdown, picked a hammer and descended on a car that is believed to belong to her ex-lover

The lady discovered that her man was cheating on her with another ‘hot beb’, a revelation that she could not stand

Video showing just how pissed off the woman was soon hit the internet. She can be seen furiously scratching and smashing a car. What happened next should not shock you

A seemingly heartbroken and furious woman from South Carolina has left everyone tight-lipped after she descended on a car, believed to be her ex-lover’s, with a hammer and smashed it into smithereens.

The lady was allegedly abandoned by her boyfriend for another woman, a move that she was not going to take lightly.

The dramatic episode of revenge was captured on camera and first posted to LiveLeak. The jilted lady can be seen approaching the car with a hammer, scratching it, as if she is writing something on it using head of the hammer, then smashes the mirrors and windows as she moves around the car.

By the time she was done, the mirrors and windows were totally shattered. At some point, the man who was busy capturing the drama tried to warn the lady that she was likely going to pay for her wanton act of vandalism. But she wanted to hear none of it.

‘Who did you say is going to beat me? Get them. Tell them I’ll knock their heads with this hammer. He wanna make out with all these dirty women?” the fiery lady can be heard saying in broken English.

She even stopped momentarily, approached the camera man, and threatened him as she pointed at him with the hammer.

It is still not yet clear whose car was being smashed, though some have claimed it most likely belonged to either the woman’s ex-lover or the new woman.