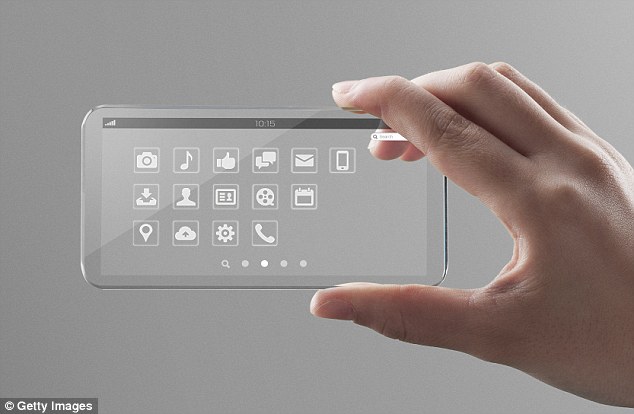 Will the iPhone 8 be TRANSPARENT? Apple’s rumored bezel-less iPhone could be made possible with an OLED screen full of holes, according to a patent granted. The Patent, spotted by Apple Insider,covers an array of OLEDs on a flexible surface, arranged with small gaps between them. Those gaps could help transmit information to a light sensor or camera under the screen, or they could enable speakers, notification lights, or a second screen under the first one. They could even form a “window” that let users see directly through the phone to another object, while the screen overlaid information onto the real world.

The technology could pave the way for Apple’s step into augmented reality.

‘Display pixels in the window region may be used in forming a heads-up display.’

Current features on the phone’s face, like the camera, ear speaker and light sensors, could be hidden beneath the screen.

This is not the first evidence that points towards the world of augmented reality, that was made popular last year with the rise of Pokemon Go.

The iPhone maker is believed to be working with Carl Zeiss on an augmented reality project, which could go on sale this year.

The wearable headset would connect wirelessly to iPhones and show information that is superimposed onto a user’s view of the real world.

‘A Zeiss employee confirmed the rumors that Apple and Carl Zeiss AG are working on a light pair of augmented reality/mixed reality glasses that may be announced this year,’ blogger Roberty Scoble wrote earlier this week.

The firm has talked about the project with potential suppliers for Google Glass-style headsets.

Several rumours have been circulating about the iPhone 8, and suggest the next device may have:

Will the iPhone 8 be TRANSPARENT?