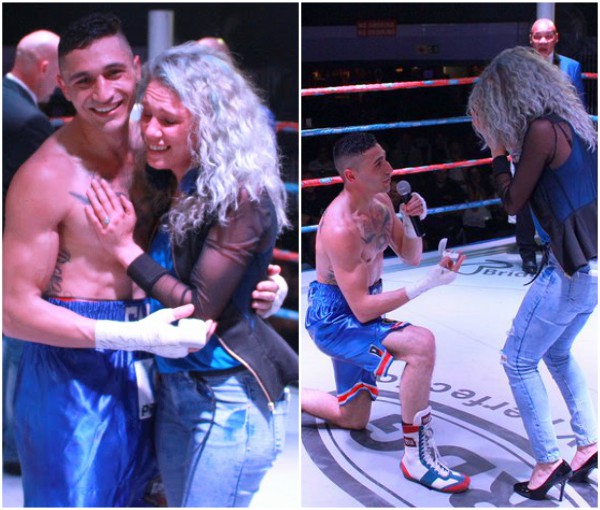 After defeating Congolese, Welcome Malubu, over four rounds at Presley’s Restaurant in Boksburg, South African boxer Mark Farah decided to ask girlfriend, Sharne Gerhardt, who turned 27 years old on that day, the ‘will you marry me question’ inside the boxing ring.

The SowetanLIVE reports that Farah first asked the crowd to sing a hearty Happy Birthday for her, to which she sobbed a “Thank you very much‚” to, however as she attempted leaving the boxing ring, Farah suddenly got down on one knee and asked her to marry him.

“Baby could you marry me?” he asked while holding a beautiful ring in his hands.
“I love you so much.”

Gerhardt who couldn’t get hold of her emotion replied;

“It was a surprise‚” Farah said. “All she probably knew was that I was going to mention her birthday in the ring. We’ve been dating for four years now and we are madly in love.”

Gerhardt was mobbed by well-wishers at the end of the festivities.

You may Also like:- The loudest crying baby contest

“Being called to the ring for my birthday was wonderful and I appreciated it‚” she said. “I just could not believe it when people started singing for me.

“I was preparing to make my way out of the ring and then he shocked me when he went down on his knees. I was like ‘Oh my God‚ what is he going to do now? The next moment he took out this ring and asked me to marry him. That blew me over.  felt I had fainted because I just could not feel myself as I wiped tears off my face. That was the best thing to have ever happened to me. It was my best moment ever. Yes‚ I love him so much and I will marry him.”