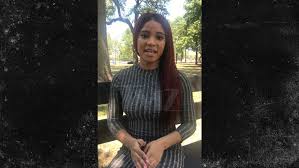 Joycelyn Savage, one of the young women whose parents allege that R. Kelly is holding in an “abusive cult” via an article published on BuzzFeed News and a press conference Monday, has issued a second video claiming that she is not being held against her will and asking her parents to leave her alone.

Possibly in response to media reaction to the first video — which was filmed indoors and in which she declined to say where she was or whether she was allowed to leave — the latest interview finds Savage outdoors, sitting on a park bench, and speaking in a slightly less stilted manner than the first.

“Dad, you know everything that’s going on with the media and the internet and what you have done is a complete disaster,” she said. “You need to stop, because right now I am fed up with everything you are doing. You’re embarrassing me and the whole entire family.”

She also alludes to an incident that apparently took place shortly before she went to meet Kelly.

“Honestly, you know the situation that had happened that night when I went to meet R. Kelly,” she said. “I would like for you—matter of fact, I would love for you to stop what you’re doing, because I can’t believe you even went this far.”

In a video released Tuesday morning, her father, Timothy Savage, challenged R. Kelly to sue him “so everybody can see your dirty laundry.” At Monday’s press conference he said he would present evidence of the family’s claims against the singer within “the next two to five days.”

In a statement released through an attorney late Monday, Kelly was said to be “both alarmed and disturbed at the recent revelations attributed to him” and that he “unequivocally denies such allegations.”