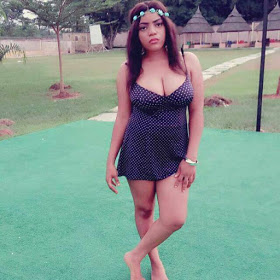 A female student of Nnamdi Azikiwe University, Miss Onyinyechi Ezeugwunne was found dead this morning in room 16 at Anita Lodge near Yesa pharmacy juntion,Ifite road Awka.
An eye witness disclosed that the lifeless body of the girl and an unconscious young man, said to be the security man to the lodge,known as Sulieman,were found after the residents of the lodge broke down the door.
According to a facebook user, “Unizik Parrot”, The said security man had kept his generator in the Kitchen (No escape for fumes), hence Carbonmonoxide from the Generator exhaust pipes found its way into the room killing the Young lady while the Security man is said to be in Coma.​However, another eye witness who pleaded anonymity revealed that the girl is believed to be dating the security man. According to him, it was believed that both smoked weed throughout the night because the room was filled with odour of weed as at when the door was forced open. Meanwhile the Lodge President posited that around 9:00am, he was called by the lodge mates that the security man has not been responding to knocks at his door by the workers who came to collect the generator used for the work at the lodge well,which was in Suleiman’s custody. He stated that with the permission of the caretaker who was called on phone,the door was broken down,seeing that the young man was still breathing,he and another resident of the lodge entered bike and rushed to the security department of the institution.
The security officers came to the resident and took the unconscious man to the school medicals.
The body of the deceased girl was also taken away after the father and policemen came.
The cause of the death is still unknown at the time of filling this report.’