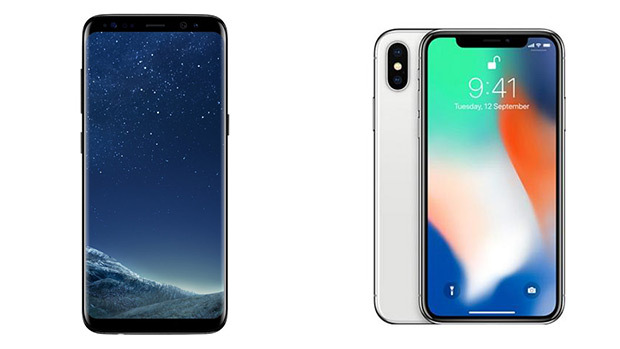 It’s a smartphone showdown! Apple unveiled its iPhone X on Sept. 12 and fans were already lining up at the Apple store to buy one. Yet, should these fanatics switch over to a Samsung? Find out how the new iPhone and the Galaxy S8 match up.

Apple fans and Samsung stans bicker more than Taylor Swift, 27, and Katy Perry, 32, and the latest salvo in this never-ending smartphone war was fired on Sept. 12. Apple debuted their incredibly powerful iPhone X and the more modest iPhone 8. While the tech giants hoped these phones would be the 1-2 punch to knock out the competition, they came off more like Conor McGregor, 28, than Floyd Mayweather, 40. Despite being the most powerful iPhone ever, according to The Verge, the iPhone X seems to lag behind the Samsung Galaxy 8 when it comes to technical specs.

Camera: The Galaxy S8, iPhone 8 and iPhone X all have a 12 megapixel rear camera, meaning that your photos will look better than ever. However, selfie-crazed fans might want to switch to Samsung. The latest iPhones will have a 7 megapixel front camera, while all the Samsung models will have an 8 mexapixel camera.

Performance: Sure, it’s great for a phone to look stunning and take jaw-dropping pictures, but what good is it if your phone is slower than slow? The latest generation of iPhones will boast the A11 Bionic processor, which, according to MacWord, will have 4.3 billion transistors and six cores. That means it should be fast as lightning and just as powerful. However, MacWorld said that in real-world use, the iPhone will be pretty close in speed to the Galaxy’s Snapdragon 835 processor. It all depends on how much RAM comes with the iPhone X. Right now, it’s unknown, while the Galaxy S8 will come with 4GB.

Which phone are you going to get?