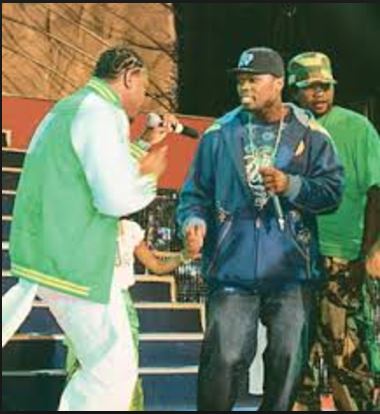 13 years ago, Veteran rapper, Eedris Abdulkareem attempted to sit in a seat reserved for 50 Cent, but was prevented from doing so. The American rapper was billed to headline the annual Star Mega Jam when a mild drama ensued aboard an ADC airline from Lagos to Port Harcourt.

50 Cent asked him to get out of his seat, Eedris refused and told him that Nigeria was his country and that he has the right to seat anywhere.

Speaking in an exclusive interview with LIB, the ‘Jaga Jaga’ rapper who claimed he was protesting to the treatment given to foreign and local acts during the musical tour, said the beef was the revolution that got every artiste respected in the Nigerian industry and outside the country.

In his words: When I was on the plane with 50, and he asked me to get the hell out of his seat. I said no, this is Nigeria, this is my country.

‘He can’t come here and tell me shit, that isn’t gonna happen. That was the revolution that got every artistes respected in the Nigerian industry and it took them all over the country.’

‘That was the defending moment for the Nigerian artistes, I can remember at the back stage, Psquare was sent away, a couple of people were also sent a way and I wasn’t happy about it.’

‘But moving forward, I’m happy for the Nigerian Industry and am happy with everything that’s happening today.’

3 years later, in 2007, the pair squashed off their beef when 50 Cent came to Nigeria to perform at media launch of the KORA Awards in Abuja, Eedris publicly apologised to him on stage.