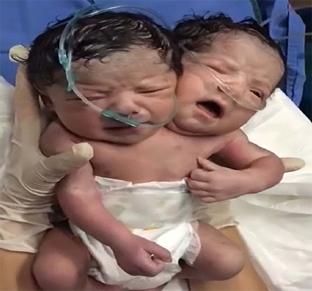 THE birth of conjoined twins has been in the news in recent times. In November 2016, Miracle and Testimony Ayeni, a set of conjoined twins born in Nigeria was successfully separated at the at Le Bonheur Children’s Hospital, Memphis, Tennessee, USA. Again, in December 2016, another conjoined twins with two heads, a neck, chest, two legs and two hands, was delivered at a private hospital in Ogudu area of Lagos.

Although the baby later died, the euphoria surrounding the birth of such abnormal babies has continued. According to a report in the Daily Mail, The latest conjoined twins in the news was born in Mexico, and the video of the conjoined twins was posted on social media towards the end of last week. Local reports claim they are both male, and it appears they both share most of their major organs. Sharing a single body and fitted with tubes, the clip of the newborns was posted on social media by surprised relatives towards the end of last week.

It is not known if the unidentified parents knew beforehand that they would be born with the deformity. While it appears that they share all of their major internal organs, but have their own heads and brains. But health officials have refused to go into detail about the rare case, instead just confirming that the mother is in a stable condition. Doctors in the city of Ciudad Juarez are now said to be looking at a ‘plan going forward’ for the babies. Siamese twins, or conjoined twins as they are known to medics, occur in about one in 100,000 pregnancies. Medical literature states conjoined twins develop when a woman produces just one egg that doesn’t fully seperate after being fertilised. The developing embryo then begins to split into identical twins during the first few weeks but stops before the process is complete. Experts say the partially separated egg then develops into a conjoined foetus. Most conjoined twins don’t survive because their organs are unable to support their bodily needs. It is estimated that 40 per cent are not alive when they are delivered while 35 per cent die within a day of being born. Their birth comes just two days after a Saudi Arabia king promised to separate two conjoined sisters from Egypt. The young girls, named Menna and May, will be treated at the kingdom’s expense, reports in the Middle East have stated.