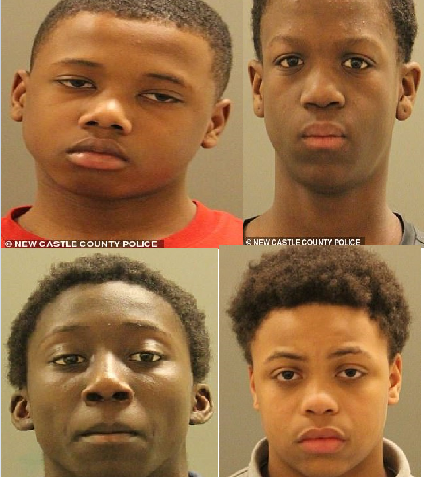 Four young boys, all between the ages of 14 and 12 are charged with kidnapping and r@ping a 13 year old girl in New Castle County, Delaware.

Kabarshenay Ellis-Pinkney, 14, Louis Miller and Joseph James-Carter, both 13, and Ja’den Glover, 12 were all charged with first-degree r@pe and kidnapping charges. Because they are all juveniles, all four may be out of prison by their 18th birthday.

According to Delaware police, the four dragged a 13 year old girl into a home on December 11 and forcibly r@ped her.

After the assault, Louis and Joseph allegedly threatened the victim with a weapon – warning her not to tell anyone what happened.

Police said a hearing would be held later to determine whether the suspects should be prosecuted as adults.

CNN does not generally identify minors who are arrested or charged with crimes.

The boys may serve less than 5 years for the r@pe, under Delaware law. Because all 5 are “juveniles’, there is a good chance that all of the boys will be out of prison by the time they hit their 18th birthday.

Police said they are worried there may be more victims and ask anybody with information to contact police.