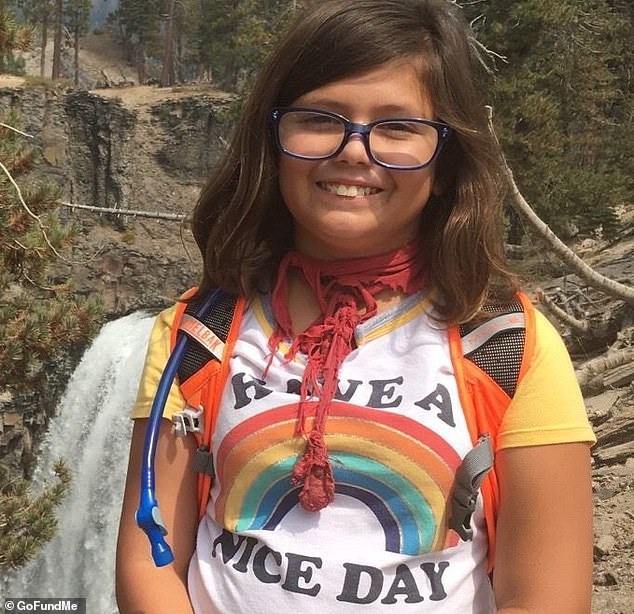 An 11-year-old girl from California killed herself after previously asking her mother to remove a photo frame from her bedroom so she couldn’t harm herself with the glass.

Nelly Pelaez took her own life on November 5 at her home in Los Angeles following a five-month battle with depression, which started when she had a fight with a friend.

Her mother Kathleen Pelaez, 43, said she discovered her daughter’s body when she went to wake her up for school.

She desperately tried CPR while waiting for paramedics but her daughter, who would have turned 12 just four days later, was already dead.

The mother-of-two is speaking out about Nelly’s death in the hope of raising awareness about childhood depression and break the stigma around suicide.

‘It was completely unexpected because she had been doing so much better. She became this warm and loving girl again,’ Pelaez told SWNS.

‘I believe this force of depression hit her hard in the middle of the night.

‘She was only 11. She could have had 90 years in front of her. I have to now live in a world without Nelly. It’s a different world I live in now, and it’s not a world I want to live in without my daughter.’

I felt very helpless. There had never been a problem that either of my children had had that I wasn’t able to kiss and cuddle away. I could not help her.
Nelly’s mother, Kathleen Pelaez
Pelaez said Nelly became depressed five months ago after falling out with a friend at summer camp.

Nelly returned home early and later blocked the other child on social media, but Pelaez said her ‘bright and brilliant’ little girl was ‘profoundly’ affected by the argument.

She began to experience ‘dark moods’ where she would ‘withdraw’, struggle to sleep and suffer suicidal thoughts.

At one point, Nelly asked her mother to remove a photo frame from her bedroom because she feared she would cut herself using the glass.

She also had sessions with a therapist and a psychiatrist and, on the advice of doctors, signed an agreement with her mother promising she wouldn’t self-injure.

‘It came to the extreme of her being not allowed to close her bedroom door or be alone in her room. I wanted her safe,’ Pelaez said. 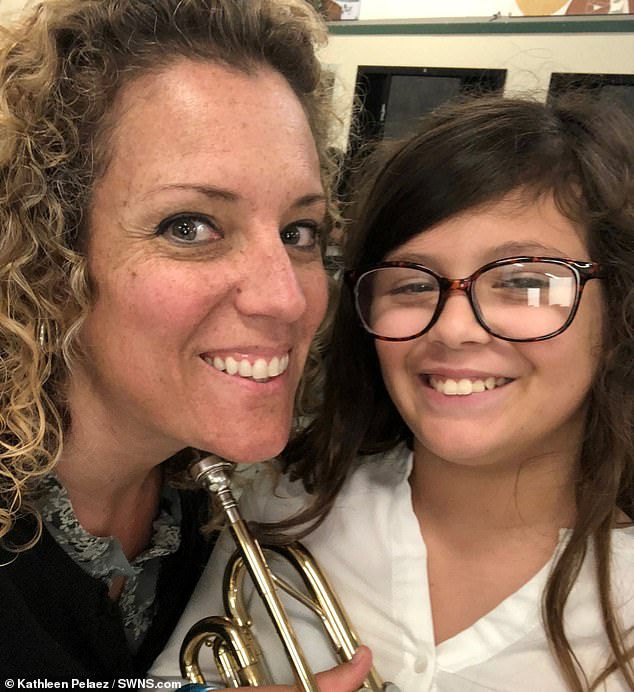 ‘She had engaged in self-injurious behavior but not ever to a degree that required any medical attention.

‘I had asked her to enter into a written contract with me that she wouldn’t do that. Since we had made that contract she had done it two more times but she hadn’t for quite some time.

‘I felt very helpless. There had never been a problem that either of my children had had that I wasn’t able to kiss and cuddle away. I could not help her.’

Pelaez said that Nelly’s death was a ‘shock’ and that in recent weeks she had seen an improvement in her daughter’s mood.

The youngster, who was close to her nine-year-old sister Emma, had recently started a new middle school and was making friends through her nightly dance classes.

Even so, Pelaez and Nelly’s dad, who are separated, had agreed that she would be prescribed antidepressants at her next appointment.

‘She had an appointment with a neuropsychiatrist scheduled for November 8, which she, of course, didn’t get to have,’ Pelaez said.

‘It was at that point that we were going to go ahead and consent to medication. We had talked about it with Nelly and she was willing to try it.’

On the day before she died, Pelaez said Nelly was in a ‘delightful mood’.

She enjoyed a sushi lunch with her family – her favorite food – and went shopping for art supplies.

Before going to bed, Nelly painted a ‘beautiful’ canvas of a cityscape with a park at sunset. She fell asleep with the TV on and Kathleen went into her bedroom to turn it off around 9pm.

We don’t realize, we don’t believe that a child this age would make this choice and so we don’t have the conversation.
Nelly’s mother, Kathleen Pelaez
‘I remember I said, ‘goodnight baby,’ and she said, ‘goodnight mom’, and then I left. That was the last time I talked to her.’

She discovered Nelly’s body at around 5.55am the next day.

‘I went into her room and for an instant thought that she was kneeling next to her bed like she was praying, which she didn’t do,’ Pelaez said.

‘I thought it was unusual and then I realized what was happening. I ran over to her and tried to lift her out of the noose.’

She said her partner Randall Hammond, 41, rushed into the room after hearing her scream.

‘He called 911. I ran and got scissors and cut her down. The 911 operator had me start CPR and then Randall took over while I ran out to the front to open the gate for the ambulance I heard coming up the street.

‘From that point on I wasn’t allowed back in the room. They came out of the room within just a few minutes to tell me she was gone.’

Nelly’s death is being investigated by the Los Angeles County Coroner and the LAPD said it is not being treated as suspicious.

The Pelaez family have set up a fund in Nelly’s memory to raise awareness about depression in children. They have already raised more than $20,000 from 400 donors.

The funds will help to cover the cost of Nelly’s memorial service, which was held on Friday, and any remaining funds will go towards community resources to maximize suicide intervention.

‘We don’t realize, we don’t believe that a child this age would make this choice and so we don’t have the conversation,’ Pelaez said.

Paying tribute to her daughter, Pelaez said her daughter was a talented pianist, singer and trumpeter who loved gymnastics, dance and taekwondo.

She also loved to paint and draw and would want to be remembered as an artist.

A GoFundMe page has been set up for people to donate to the Nelly Pelaez Memorial Fund.